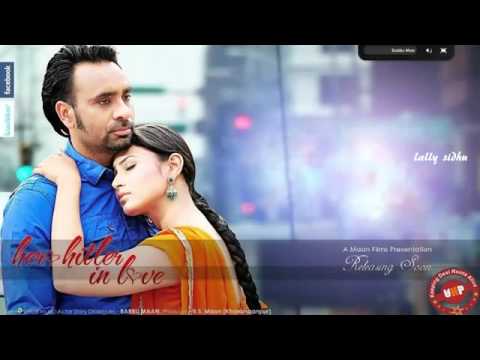 Movie revolves around main character Hitler who loves his village and tries to help everyone. He believes in true love and helps the lovers to unite and often stand with them against the society. Suddenly he falls in love with a girl named Sahiban from Pakistan. Society again stands against him for his decision to marry a girl from Pakistan. If Babbu Maan have huge fan following, his hypnotized devotees also has got so much expectations from their beloved multi-talented artist. Promotional videos and short cut trailers of "HHIL" seemed to fulfill Audi-expectations. This is the first time that so popular artist has not released the music album????. This is how "real" excitement is created for everyone by Maan Films.

Story of the "HHIL" is straightway based on the classical Punjabi story of Mirza Sahiba and Babbu Maan has given this classical love story just his own imagination to shoot it in present time. Film starts with cool introduction of the unique characters- your expectations are really high here.......alas........they will be high only here.

First half of the film is filled with the "song" after every minute to distract you from the actual film. In the second half when there is no Babbu Maan song after every five minute you want to wait for the climax as only after that you suppose to leave the theater hall. Shocked and surprised.......... how Babbu Maan could not find any professional story writer or why he never wanted anybody else to write even a single subplot for his movie. Finally..... If he wanted to satisfy his own desire to become a writer for this movie he should at least put little.....I mean really little bit effort to make the story and script interesting at any possible level.

Film Director Sukhwant Dhadda takes things under control and shows his direction skills at times however acting wise he appears to be really "scared" from Babbu Maan being in-charge of the crew. Photography/editing are the plus points of the film, especially in the songs. Special effects used in the songs provides HHIL "SRK" movie look.

However, in one song images of the snow-white Mountains directly stolen from somewhere (just the mountains no single person visible)........ and there you feel like you are watching your relative/friend's 10-15 years old wedding VHS on big screen. Some consideration seems to be taken to choose the shooting locations.

Supportive cast provides sort of adequate support for the film. Bhagwant Maan easily delivers the Pakistani accent and this suit him very well. Actress Mouni Roy does OK job for her role, looks alright in the songs.

Now the Hitler we are in love with..........Babbu Maan has shown his creativity/talent in unique way which is set construction for the movie in his own village. These sets seems to be inspired by Australian landscapes used in the parks and other community places, however these sets provide cool look for the movie in fewer scenes.

Acting wise Babbu Maan attempts to ticker Audi bones- initially he actually irritates the audience. Later on he gives convincing comedy scenes with his own created weird dialogs where he tries to win the actress with his spiky hair style. In Most scenes Babbu Maan is usual Babbu Maan. He shows his real talent almost in every song with his well known lyrics/music and this is only real "Player" of this film. His magic still works in the songs, no doubt about it. Hindi language is used for two songs and one song completely dedicated to Pakistan, may be attempted to win the Paki-Punjab audience.

High expectations of the "hypnotized devotees" only and not released music album can help "HHIL" to stay in the cinema halls. After watching the movie one will find out why the music album was not released. Watch it for the creative work of the Khantmannpur village and the lyrics/music of the Babbu Maan.

Salute to Babbu Maan for accepting before movie-release that this movie will not recover its budget and providing work opportunities for his village people.

Apologies for using "best policy" to create this piece of information.

Submitted 14 hour(s) ago by cboitde12

Submitted 1 day(s) ago by datanumen27

Submitted 1 day(s) ago by datanumen555

Submitted 1 day(s) ago by digitaloptimize

Submitted 2 day(s) ago by vinaytiwari