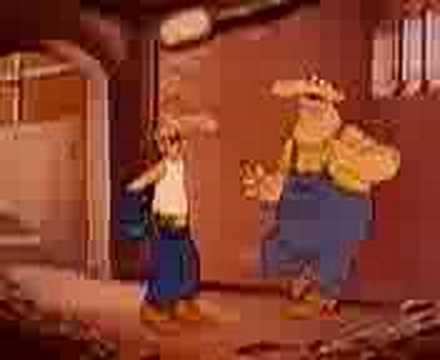 Because of a bet, Werner and his friend have to construct the fastest vehicle to win a race, because life depends on it. "Werner - Das muss kesseln!!!" is the second from so far 5 Werner movies and directed by Michael Schaak again. The quality he reached on the Werner films, especially the very first, is unmatched by him so far. "Der kleene Punker" is very forgettable and "Das kleine Arschloch" is totally unfunny and equally offensive. This second Werner movie (just like the first) also received a Golden Screen, the decoration for films that are very commercially successful with German audiences. There are some known names in the cast, at least to German audiences: Martin Semmelrogge, Carlo von Tiedemann and Lilo Wandres, but Otto Sander was not a part of it this time. He returns later again though.

In this almost 20-year-old film, there is one clear antagonist: Nobelschröder who wants to have little Borsti and feed him to his gang. Early on, it is winter this time and Werner has some especially tough work to do. Lucky for him, he is sick. However, as solid as the parts with Nobelschröder (nice voice work by the way) and Werner and his friends were, the highlight of the film is once again Röhrich, their incompetent boss. He does not need lout motorbike noise or rock music, he is just funny the way he is in a very unique manner. When they create their own little distillery, it has to go wrong of course and complete chaos ensues once again as always when Röhrich is included. Also, he makes Günzelsen his "personal friend" in this film and that story is followed in one of the next films. Apart from that, I also liked the ending. The part where they simply beat time to save Borsti's life was actually very witty and nicely executed. I found it funny how they went too far back down to Borsti's parents "making" him.

I still believe the very first Werner movie is the very best, but the next ones are not bad at all either. The most notable change is that the first is a mix of live action and animation (just like the 5th), but films 2 to 4 are exclusively animation. Anyway, good movie, I laughed a lot. Recommended. This is the second part of the trilogy (so far ...) of movies based on the "Werner" comic books, which have long achieved cult status in the German - speaking part of the world. The dry and minimalistic humour of the original books could not be expected to translate well to celluloid, but in addition to this the plot is paper - thin and unoriginal, and the animations often look amateurish. Save your money for video rental or cinema ticket and invest it in one of the earlier "Werner" comic books (those that were originally published by Semmel Verlach). And a few bottles of the ember nectar.

Submitted 3 day(s) ago by eliasrao

Submitted 6 day(s) ago by goosfacts