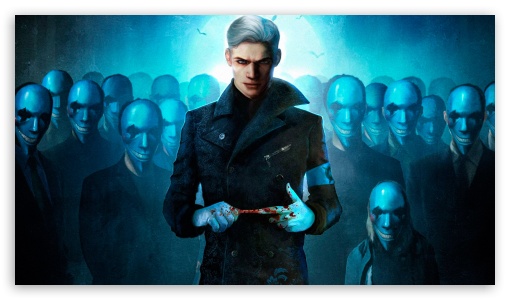 
2,000 years ago the human world was ruled over by the demon world. However, one of the demons, the legendary dark knight Sparda, awoke to justice and defeating the evil emperor Mundus sealed the demon world away from the human world. He then sealed his own darkest powers away (fearing he would become a threat to the humans himself) and assumed a human form, living among the humans, and for 2000 years he preserved the harmony of the worlds. Eventually Sparda fell in love with a human woman called Eva and had twin half blood sons, Dante and Vergil. However, Sparda died, and shortly after, Eva was killed in a demon attack that separated the two sons. Hating the demons for taking away his mother and his brother from him, Dante becomes a demon hunter and continues his fathers work, seeking revenge. 20 years on, Dante is called to Mallet island on a job, and comes face to face with an ancient enemy of his fathers. After losing his brother and mother to demon lord Mundus, demon hunter Dante and his new friend Trish embark on a quest to confront Lord Mundus. Okay, I first played the series with Devil May Cry 2 in passing. I wasn't impressed. Then I learned that in the rest of the series the plot is more coherent and Dante is way cooler. I'm glad I believed them. In terms of characters and their interaction, it's second only to number 3. Dante, the hero, the mysterious woman who wrecks his office (now a pattern) and the Black Knight Nelo Angelo. Dante's past is unraveled as the game progresses, as are everyone Else's, which all tie in in many clever ways. Then there is the Dark Emperor Mundus, smote by Sparda, the legendary Demon who woke up to justice and saved the human world from Mundus' hordes. In terms of plot, it's great. A mercenary demon hunter is brought to an island where the Dark Emperor is gathering his power, and so on (play the game if you want the plot, it's more fun!) The cut scenes are excellent, as is the writing. Dante's demonic heritage gives him physical resistance that makes for some "interesting" scenes.

10/10, just in case you missed that above. If you haven't played this yet, do it. It seems Hollywood can't avoid the craze with adapting video games into feature length films with kick ass effects involved. . .

Okay so we've been given films like Mortal Kombat 1 & 2 and Resident Evil are strong justifications with comic books already firmly establishing close ties with dominating the big screen (i.e. Blade, X-Men, The Crow, Spiderman and Matrix).

The game is more than what any typical game playing die-hard fan could wish for: stunning graphics, killer moves and one beautiful gorgeous looking babe named Trish. But then again it's only a game or is it?

Bring on the movie, that's all I'm concerned with right now. Just hope someone like Mark Dacascos could be considered for the lead role as the character Dante.

For the meantime anyone a fan of Resident Evil will not be dissapointed at all as this is "must-own" video game of the millennium.