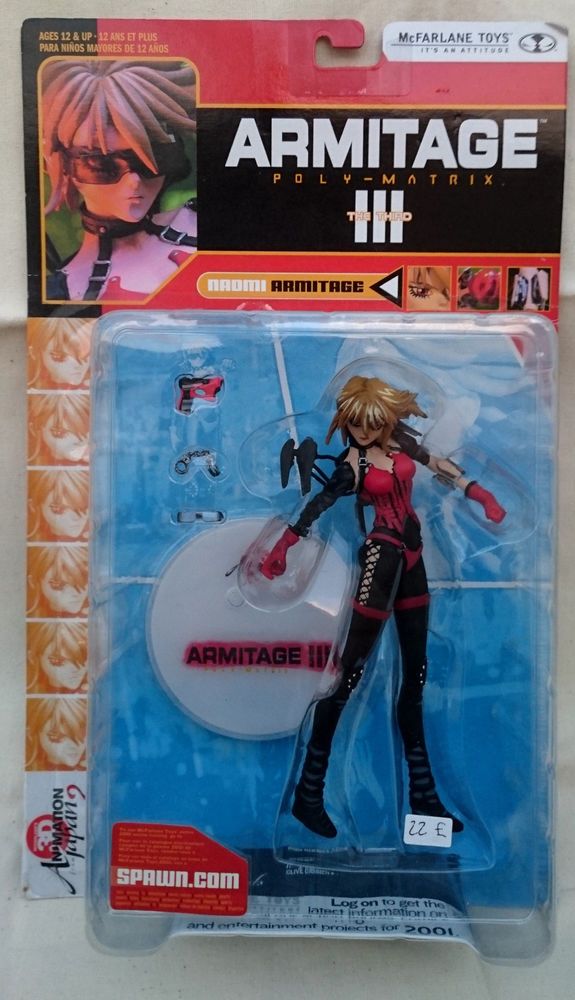 
A policeman, Ross Sylibus, is assigned to a unit on a Martian colony, to find that women are being murdered by a psychotic named D'anclaude. He is assigned a very unorthodox partner named Naomi Armitage, who seems to have links to the victims. To stir things up more, every victim is found to be an illegally made third-generation android, built to be almost perfect replications of humans. It becomes a race against time when the government attempts to cover up the existence of the 'Third Types', and eliminate the only ones with the evidence. And even more importantly, why are the Thirds created to be so similar to humans, even to the extent of being indistinguishable from them on every level, mentally and biologically? SPOILERS

Armitage III was one of my first animes I saw in the 90's on Sci-fi channel. It was also one of the first anime series I purchased, together with the other 2 Pioneer/AIC classics Pretty Samy and Moldiver, on Japanese DVD. The Japanese DVD release of the OVA series by the way only features the dubbed version and the Japanse audio version, there is no subtitled version.

Armitage III is an anime set on a Total Recall like megalithic city on Mars. The plot is very deep, it includes issues of self identity, faith, hope, longing and every other possible emotion in the book, likewise the lead character - Naomi Armitage goes through each of these human states. Naomi herself is a Battle Angel Alita like heroine, a bit too Lolita like for me perhaps, yet she is a beautiful babe, with a conscience who packs a mean punch and is able to dispose off both psychopath driven giant robots and street thugs. If you're looking for lovable characters worth caring about, stop searching.

The plot of the film has to be summarised by Naomi's memorable words, "If Humans did not want me, why did they create me?" You can hardly ignore the previous church scenes before this cathartic moment, which no doubt also serve as a metaphor for peoples' religious struggles with faith and purpose.

There are two other particularly touching moments for me in this brilliant series. One is the battle in the desert between Ross (her partner) and Armitage and a droid army. It features Armitage with wings and Ross in an armoured robot suit blasting away at the military robots and helicopters while sleepy electronic music plays in the background.

The images of the battle are superimposed on a news report of the merger between the Earth and Martian governments and are being viewed by female robots in the Martian city. For once we see these beautiful anime robot girls stop being babysitters, waitresses or personal secretaries and we see them staring mesmerised at video monitors as the battle is played out before them. It is difficult to say if they understand what is going on, but they do seem to behave beyond their simple programing. It is quite obvious that their human counterparts can not see this battle - a battle which is about these very robots because part of the deal in Mars joining Earth was Mars getting rid of Robots.

Another touching scene had to be that featuring parental rejection, where Naomi's creator - a person she always though was her father, who disappeared a few years before finally stands before her, yet he fails to acknowledge her humanity and simply ridicules her - even to the point of pity. If this won't move you than I don't know what will.

Armitage III (4 part OVA series) is one of the best anime series out there, I highly recommend you see it, see it with other greats like Serial Experiments Lain, Battle Angel Alita and Ghost in the Shell. You will care for Naomi as you cared for Alita and Lain and the story is just as thrilling and through provoking. Beyond that, it is also a good detective murder story. Armitage III is a classic cyberpunk anime film featuring the voices of Elizabeth Berkley as Naomi Armitage and Kiefer Sutherland as Ross Sylibus. I found the anime movie to be more interesting them the OVA series. This is the story of a woman named Naomi Armitage who is a Third (an android) who teams up with a cop named Ross to bring down a man named D'Anclaude who is destroying the Thirds. Will she succeed?

The animation is amazing and the Geneon DVD was one of the first to feature THX Digitally Mastered sound. The story is really interesting and is told well. There is no Japanese language track but that's OK. I enjoyed this version more due to the voice cast.

I give Armitage III: Polymatrix a 7/10. Very successful video production "ARMITAGE III" was originally released as a four-part OVA series. The series was heavily cut and edited for the later theatrical release. But there were also other reshot scenes added, which are only seen in the theatrical version.

Submitted 15 hour(s) ago by SeciliaRams

Submitted 16 hour(s) ago by SeciliaRams