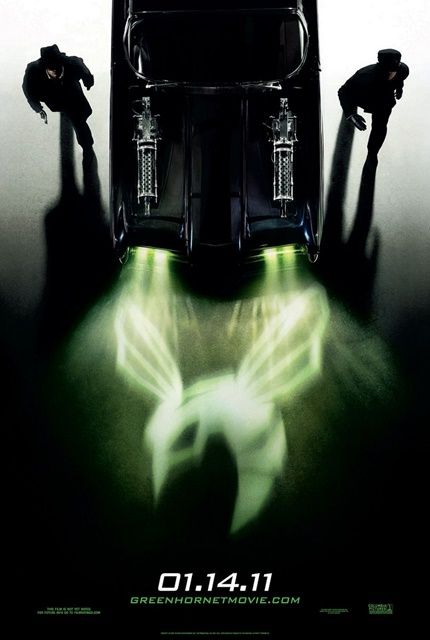 
When the publisher of "The Daily Sentinel" dies, his son Britt Reid inherits his newspaper. The idle Britt is a playboy that parties all the time with women and hates his father but he is forced to become the new publisher. He also meets his father's mechanic Kato, who is a skilled fighter of kung fu, and they decide to fight crime for fun wearing masks. Britt uses "The Daily Sentinel" to promote "The Green Hornet" and his sidekick, attracting the attention of the kingpin Chudnofsky, Now the Green Hornet is chased not only by the police, but also by Chudnofsky that is hunting him down. Following the death of his father, Britt Reid, heir to his father's large company, teams up with his late dad's assistant Kato to become a masked crime fighting team. When Van Williams and the great Bruce Lee made The Green Hornet and Kato famous back in 1966, who would have thought that 45 years later in 2011 that funny-man Seth Rogen and Jay Chou would team up and suit up in the Green & Black suits to keep the tradition alive? I don't think none of us saw that coming. I have to give director Michael Gondry his props, he delivered a one-of-a-kind movie that has started the new year off with a bang, slap, ka-bow. Incredible!!!! I can't leave out the wonderful supporting cast. We have seen her in Gangs of New York, we've learned that there was Something About Mary – Cameron Diaz delivered in this movie. And who can't forget about the villain – Chudnofsky aka Bloodnofsky (I guess I spelled that correctly) – Christoph Waltz was awesome. I was expecting a cheesy movie, but I got a rib-eye steak and a baked potato – this movie was off-the-hook. I'm demanding a refund of my $1 rental fee and an additional fee for "Pain and Suffering". How could they SCREW UP a movie like this? Comics should be Barred from making any film other than a Comedy! When the Green Hornet aired on TV, it was one of my favorite shows at the time. Real Action! Serious! Non of that comic relief crap like the Bat Man show, (which stunk) And the Green Hornet show introduced a character to television we hadn't seen before... Bruce Lee as Kato.(OMG) Then there was the technology... Surveillance Drones? Years later and they're finally here. Seriously... The Green Hornet TV show was ahead of it's time and the movie set it back 50yrs. Yea...I want my Money Back! Never achieves sufficient traction to go the blockbuster distance. It's best to let Rogen himself speak about this subject. From WorstPreviews.com: Seth Rogen, writer and co-star of the upcoming The Green Hornet, told Sci Fi Wire that the film will possess elements of both comedy and action. "To me, the two aren't mutually exclusive," said Rogen. "You can have a big action epic with a lot of funny parts." Green Hornet is a big-screen adaptation of the superhero franchise, which was adapted as a popular 1960s television series and was inspired by the original radio program created in the 1930s. Hornet follows the adventures of Britt Reid, a bored playboy who inherits his father's crusading newspaper, the Daily Sentinel. By night he is a masked hero, fighting crime with his sidekick, Kato, who has incredible martial-arts skills. Rogen, whose film projects to date have been primarily comedic in nature, said that the forthcoming update will evoke other action films that feature an undercurrent of humor. "I've seen the early 'Indiana Jones' movies in theaters, and they kill," Rogen said. "There's laughs throughout the whole thing, and it doesn't feel like a comedy per se. It just feels like something that's trying to solicit reactions from the audience, and we think of movies like 'True Lies' and stuff like that. That's more kind of what we're going for with this." Director Michel Gondry also has said this about the film's tone: "It's an action movie with some comedy in it. The action will be fast and furious and the comedy will come from the dynamic between Kato and Britt Reid." Reportedly, he stepped down to work on a superhero spoof comedy starring Jack Black. It's called "Live With Me" by the Rolling Stones.