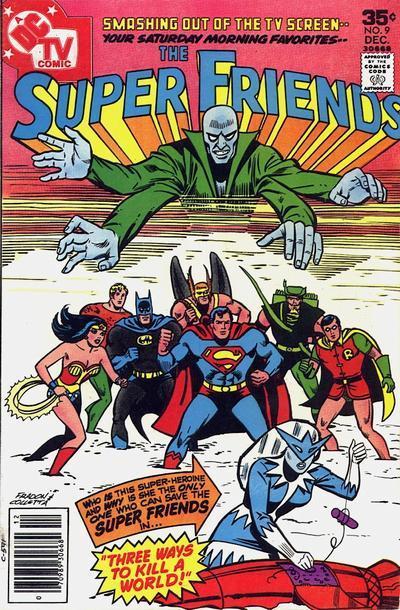 
The Justice League of America battles the plots of the supervillian team, the Legion of Doom. In this show, Superman leads a superhero team comprising of the greatest DC Comics superheroes against a team of 13 of the most notorious DC Comics supervillians called the Legion of Doom, led by Lex Luthor in a war that has the fate of Earth in the balance. This was an hour long show that was actually two shows put together. Half of it was a continuation of The All-New Super Friends Hour but just a half hour this time. The second part is them fighting the Legion Of Doom. That's the series I remember seeing the most as a kid, it was probably re-run by itself later. This is the only series that came close to the comic book, they even go to the Bat cave. I would highly recommend not watching any series that came before this one. Here is a show I used to watch in reruns when I was a kid, looking back on it, the show still make me that's good that they have so many superheroes and 13 of the most sinister super villains in the DC Universe.

While this is inspired by the DC Comic called The Justice League for this series they were called the Superfriends.

For the Superfriends the team included: Superman, Batman,Robin, Wonder Woman, Aquaman, The Flash, Green Lantern, Hawkman, Black Vulcan, Apache Chief, and Samurai. Now this was a interesting mix for the protagonists and it works to give the fan favorites and lesser known heroes to get a share shot on the show.

Now they are up against 13 of the most dangerous villains of the DC Universe join forces to do battle against the Super Friends.

The Legion Of Doom are the main antagonists of the series and with a team like this it's easy to see why.

The show just has that appeal that would make comic book fans see what it was like to watch a comic book series back in the day.

And the show is child friendly but it is good enough for adults to watch as well without parents worrying about it to be too dark.

The series feature some good animation, talented voice work from the cast and the intro was enough to make you interested in the show.

The stories for the show had some original ideas for a 1970s animation show but never the less I enjoy this show as a kid when I watched it on reruns.

So do yourself a favor if you're a fan of comic books watch this show Superman, Wonder Woman, Batman, Robin, Aquaman, Green Lantern, Flash, Hawkman, Black Vulcan, Samurai and Apache Chief. Lex Luthor, Bizarro, Brainiac, Solomon Grundy, Toyman, Cheetah, Giganta, The Riddler, Scarecrow, Black Manta, Sinestro, Gorilla Grodd and Captain Cold. The headquarters for the Legion of Doom. It is metallic, dome-shaped and has two windows that look like eyes--making it resemble the helmet of Darth Vader, an evil space villain in a movie that was only a year old by 1978. This meeting hall doubles as a ship that can travel over the globe and across the universe. But one can usually find it "deep within a bleak and dismal swamp, hidden beneath its murky waters." Superman's arch-foes are Lex Luthor, Brainiac, Toyman, and Bizarro. Wonder Woman's are Cheetah and Giganta. Batman and Robin's are The Riddler, Scarecrow and Solomon Grundy. Aquaman's is Black Manta. Green Lantern's is Sinestro. Flash's are Gorilla Grodd and Captain Cold.

Isn't Giganta Apache Chief's foe? In this series, yes. In the comic books, she is Wonder Woman's foe. No. And neither are Marvin and Wendy. There are no teenage sidekicks in this series; nor are there any cute animals (like Gleek or Wonder Dog) to provide comedy relief.

Are you sure the Wonder Twins aren't in this series? That depends on what you mean by "this series." IMDb categorizes this, the second segment of an hour-long program, as a separate series. The first half-hour segment does indeed feature the Wonder Twins. But the second segment - what IMDb means by "this series" - does not feature them. Black Vulcan, Samurai and Apache Chief were all created either for this series or for an earlier SuperFriends series. They were created to add racial diversity to the cast of heroes. Black Vulcan is black; Samurai is Japanese; Apache Chief is an American Indian.

Are you sure Black Vulcan did not come from the comic books? There was a very similar comic book superhero called Black Lightning. According to Wikipedia, Black Lightning could not be used for this series "due to disputes between DC Comics and Tony Isabella, the creator of the character." Cartoon fans love to ridicule Aquaman. But some look at the other characters and ask: "How is he especially ludicrous?"

Aquaman, who is very capable under water, has the power to call fish and other marine life telepathically and bend them to his will. But above the water? Well, he's not exactly Superman or Green Lantern. In fact, either of them would presumably be more capable than Aquaman, even in his own domain. Green Lantern would even have better control of the fish (unless they were yellow).

Aquaman fit very well into the first incarnation of the "SuperFriends" with its heavy-handed environmental themes. Early villains were always polluting the oceans, causing tidal waves and so on. By this series, Aquaman's dramatic usefulness was more dubious. He probably won his role in this series by virtue of precedent and inertia. Probably as a convenience to the writers and animators. Note the awkwardness of having Aquaman hitch a ride with Wonder Woman in her invisible jet. Supposedly his power ring cannot be used against anything that is yellow--which would seem to give Sinestro, who has a yellow power ring and no corresponding weakness, the power to crush him like an ant. But it never works out that way. In fact, according toseanbaby.com Green Lantern was able to use his ring against something yellow in 24 out of 30 "SuperFriends" episodes in which he appeared. In fact, in one episode, Green Lantern himself was making yellow objects from his own power ring. Filmation, which was producing a Batman and Robin cartoon at the time, had exclusive animation rights to The Joker and other Bat-villains.

Otherwise there are no glaring omissions from the roster of bad guys. Superman's primary arch-foe was Lex Luthor. The other villains were either the top enemies of the Justice League members, or they were pretty close. Hawkman was the only comic book hero without an arch-foe in the Legion. Black Vulcan, Samurai and Apache Chief were created for "The SuperFriends" and thus had no arch-enemies for the creators to draw from. (Giganta, Wonder Woman's enemy, became Apache Chief's for this series, as noted above.) Several DC Comics characters have given themselves the name of "Toyman." By 1978, there were two. This show's Toyman is modeled on the less familiar one, who appeared briefly in the 1970s and wore a jester-like costume.

The more familiar Toyman appears in "The New Adventures of Superman (1966)" (1966). In episode 7, "The Giants of Doom," four members of the Legion use a mixture of special elements to become 100-foot tall giants. They are Bizarro, Sinestro, Toyman and Captain Cold. Later, Superman, Green Lantern, Batman and The Flash become giants, too, and do battle with the oversized villains.

Were they jealous? Giganta expresses her derision. Apache Chief, in keeping with his nobler character, stays silent. In the 1970s, the word "lube" may have had a sexual connotation, but not as inescapably as it does now. The risibility of words comes and goes. Consider the ejaculating characters in the Sherlock Holmes stories. Or consider Lady Macbeth's speech: "Come, thick night,/And pall thee in the dunnest smoke of hell,/That my keen knife see not the wound it makes,/Nor heaven peep through the blanket of the dark,/To cry 'Hold, hold!'"

Why does Batman command Robin to use Bat-lube? They are escaping into the air, courtesy of their Bat-cables, when Solomon Grundy suddenly grabs their legs. They each press a button on their respective utility belts and an oily substance squirts out, which runs down their legs (!) and causes Grundy to lose his grip on them.

Oh, come on. Did he really say "Bat-lube"? Here's how the lines go exactly:

ROBIN: He's got us, Batman!

BATMAN: But not for long, Robin. Use your Bat-lube! Superman: Great Scott! or Great Krypton!

Flash: Great wings of Mercury! (once borrowed by Wonder Woman)

Apache Chief: Great Spirit! Of course, he says "Inuk-chuk," which means "big man," according to Wikipedia. This is not an interjection but a magic word that helps him to grow fifty feet tall.

Samurai has three magic phrases. "Kaze no Y ni Hayaku" causes the lower half of his body to become a tornado and propel him into the air. "Tmei Ningen" makes him invisible. "Igo Moen" engulfs him in flames. (See his Wikipedia page.) Don Messick was an extraordinary voice talent with a wide variety of characterizations. The taunting, raspy-voiced Scarecrow was created by the same man who gave us Scooby-Doo. Frank Welker, another extraordinary talent, is best known as Fred from "Scooby Doo, Where Are You! (1969)" (1969) and its countless follow-ups. The high-pitched voice of Toyman is similar to his characterization for Slimer from "The Real Ghost Busters (1986)" (1986).

Submitted 18 hour(s) ago by maxcorp10