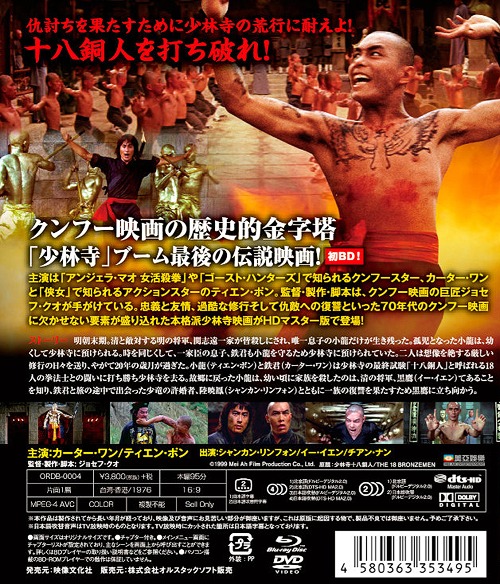 
During the Manchurian invasion of China, the son of the Ming Dynasty General takes refuge in the Shaolin Temple to learn martial arts, so that he may seek revenge for his dead father. But he must first endure the rigorous test of the temple's legendary 18 Bronzemen. Walking through my local DVD shop I wasn't intending to buy anything and definitely not something I had never heard of before but I saw this for real cheap so I picked it up. I just wanted something different to watch and review for my website. I don't regret purchasing and watching this film. Besides my mate that watched it with me I can safely say that out of everybody I know I am the only person who has seen this movie. So onto reviewing The 18 Bronzemen: Part 1.

The story in itself is quite confusing and most of it does not get explained until towards the end but I'll try my best. So there is a government known as the Ching government and they decide to kill anybody that supports this guy called Ming. A baby (later called Shao Lung) is rescued and brought to the Ming friendly Shaolin Temple where he is brought up in the art of kung fu to exact revenge upon his family. At the same time another child is taken to the Temple and the two grow extremely close. After many hardships they two enter the "line of 18 bronzemen" which is the final task to graduate from the Temple. Here they fight men literally made from bronze. If they fail they die. After failing the first time and helping each other to escape they try again and succeed. Shao Lung then decides to track down the evil tyrannical ruler to avenge his family.

The movie was directed by Joseph Kuo and starred Peng Tien as Shao Lung and Carter Wong as Brother Wan (the kid that was sent at the same time as Shao Lung). The movie even has a decent twist which took me by surprise. A complete laughable part however is when a woman is apparently disguised as a man and everybody thinks she is (but it is clearly obvious it is a woman).

So despite its flaws, most likely because of being something that is completely different to me, I found this to be an enjoyable movie. This is a hard movie to recommend as it would have a fine niche market but hey, if you find yourself bored, why not? I look forward to watching part two.

originally posted on my blog www.comikkazee.com Being a Kung Fu practitioner and cameraman I naturally watch a lot of old Kung Fu flicks. But until recently I've never even heard of "The 18 Bronzemen". I stumbled across it due to a reference in the game "Sleeping Dogs" and found the title and imagery very intriguing so I figured I'd give it a try. Unfortunately I could only get my hands on the cropped 4:3 release which really ruins the composition of every shot and makes the fight scenes nearly incomprehensible. Nevertheless the first half was just what I imagined and highly entertaining. Which is why I kept on watching despite the horrible cropping. Those bronze warriors are an amazing Idea and also pretty well executed. Combined with the mostly gray scenery this produces a very unique and aesthetic visual appeal. Sure, the costumes could've been more detailed but still, it works. The fights against Bronzemen are like the final exam for our protagonist and are intercut with training sequences. I was always looking forward for the next scene with the Bronzemen. I mean, this is basically the title of the whole movie so there have to be more scenes with them, right? Right?!

After what felt like 10mins. with the Bronzemen the protagonist leaves the temple behind and the whole ordeal is never mentioned again. What we get now is a standard revenge plot and sub par choreographies. This drags on for the rest of the film....

Why would you do that? Why would you throw away such a great idea that worked so well? They obviously knew the value of what they had - they named the movie after it!

Personally I would recut it. Focus on the training in the temple and the quest of beating the Bronzemen. And after the Protagonist and his friend have mastered this challenge the abbot sends them on their way to serve their country and the people. They wander off down the mountain while the credits roll. MUCH better movie just like that. Instead we get this....

Submitted 11 day(s) ago by titanrig

Submitted 43 day(s) ago by simonedsouza

Submitted 43 day(s) ago by simonedsouza

Submitted 44 day(s) ago by Quickfixnumbr

Submitted 44 day(s) ago by FainaDsouza