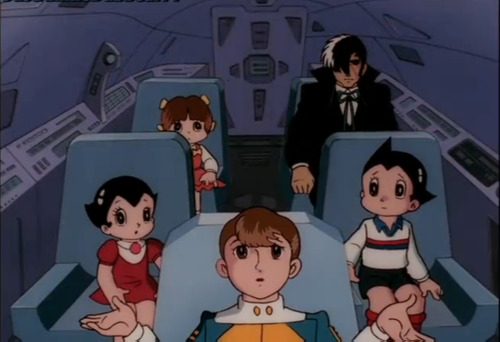 Set in futuristic Metro City, Astro Boy is about a young robot with incredible powers created by a brilliant scientist in the image of the son he has lost. Unable to fulfill the grieving man's expectations, our hero embarks on a journey in search of acceptance, experiencing betrayal and a netherworld of robot gladiators, before he returns to save Metro City and reconcile with the father who had rejected him. When a scientist's young son dies, he secretly creates a powerful robot child to replace him, however the robot uses its incredible powers to become a world famous super-hero, and faces his biggest challenge when an alien race threatens Earth. Among recent animated features, "Astro Boy" can seem a bit like the runt of the litter – but like most runts, it has a kind of underdog charm that makes one want to root for it. This is particularly the case since the series – which debuted on American television in 1963 – was an important forerunner of Japanese anime, an art form that would come to its fullest flower a few decades later.

Now fully clothed and bathed in sparkling CGI color, this modern version of Astro Boy is, like his more primitive cell-drawn, black-and-white predecessor, the robotic invention of a grieving father. When his son, Toby (Freddy Highmore), is killed in a freak accident, famed inventor Dr. Bill Tenma (Nicholas Cage) designs a robot facsimile to take the boy's place. But Tenma soon discovers that a cybernetic creation is no substitute for the real thing, so he kicks Astro Boy out of his house, leaving him to make his own way in the world. Thus, the adorable tyke with the rocket-fueled feet and the enviable ability to soar to great heights, dig through solid ground and lift impossibly heavy objects faces life in a society not always known for treating its robots too well.

This version of "Astro Boy" - sans, I might add, its catchy and familiar theme song - is not particularly impressive on a technical level; its backgrounds are mundane and its computer-animation merely adequate, but the story hits all the right buttons emotionally, allowing kids in the audience to identify with a little boy who's just been rejected by his own father and who finds that the world can be a mighty cruel place to anyone who's in any way "different" from the others around him.

There are evil characters aplenty – the election-obsessed President of the country (Donald Sutherland), an unscrupulous carnival barker (Nathan Lane) who promotes fight-to-the-death, gladiatorial games for robots - to keep the little guy on his toes, but it's Astro Boy's resourcefulness and sweetness that make him a fine role model for kids. And that boy sure can fly! I like the Astro Boy series (60s, 80s, and 00s), all of which are a little different from each other, but with a lot of the same heart. So when I watched the movie, well it left me feeling a bit...weird.

Now a lot of people like to complain about the voice acting, and character designs, and the art and animation style. I don't have any problem with those things though. The character designs are faithful to the source material, but with it's own CGI twist; just like each series had it's own little art twist based on the capabilities and budget at the time. Each series also had it's own voice actors, and the VAs in this movie did a good job at bringing their character's life.

With that being said, this is like a 10 act story, with a couple acts cut out. There's the establishing act with Toby's death and Astro being created; the next act is Tenma trying to use Astro to replace Toby, but then finding that he can't so easily replace his dead son; the next act follows Astro making friends and trying to come to find his place in the world (robot or human), only to have the world (the surface) kind of reject who he is and instead thrust their own idea of who he should be onto him; and then we just jump to the final act where the villain's monster becomes too powerful and now Astro has to save the day (which has many "self discovery of powers" elements that should be reserved for middle "figure out your powers" act, not "final climax battle").

If you ask me, this should have been a TV series. It has all the potential to be another great incarnation of Astro Boy; Astro Boy origin, figuring out how Astro fits into the world, and characters that have a lot of potential. Unfortunately, a lot of elements that should have gotten their own episode (metro city's trash culture, the robot resistance, the girl's parents, Astro pretending to be human with the surface dwellers, the robot games, fixing up ZOG, competing in the robot games and his new friends coming to grips with what he is, the government trying to shut him down, why the president wants to harness the power of the red/blue core, etc.) were just kind of rushed through.

I enjoy the movie, but I just feel wanting more. Older viewers are more likely to see a muddled film full of one-dimensional characters and insultingly strident politics.

Submitted 3 hour(s) ago by godhelpu

Submitted 8 hour(s) ago by hernandezmaria

Submitted 1 day(s) ago by annabellmatt

Submitted 7 day(s) ago by contacthelp999