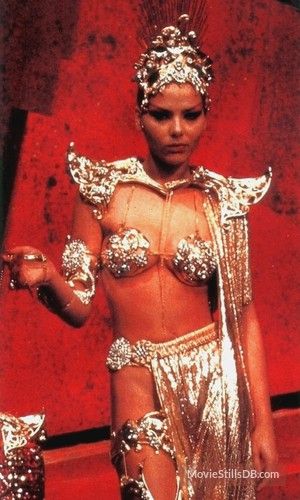 
A football player and his friends travel to the planet Mongo and find themselves fighting the tyranny of Ming the Merciless to save Earth. Flash Gordon is an American football player who along with Dale Arden are returning to New York City after a long vacation, until the plane they are passengers on crashes into the laboratory of Russian scientist Dr. Hans Zarkov. Both Flash and Dale become unwilling passengers on-board Zarkov's rocketship as Zarkov sets a course for the planet Mongo. Arriving on Mongo, Flash and his companions find the planet is under the rulership of the evil Emperor Ming the Merciless and Ming is attacking Earth with natural disasters as he bids to destroy Earth. Realizing that Earth and the human race is in mortal danger, Flash decides to unite the kingdoms of Mongo and combine the forces of rivals Prince Barin and Prince Vultan to rescue Dale, who is to become Ming's wife and defeat Ming and save Earth from annihilation. When American football star Flash Gordon meets Dale Arden on a flight to God knows where, they encounter a meteor shower and crash into the greenhouse of a mad scientist who thinks that clouds going in front of the sun is an eclipse, the mad old man seems friendly but then kidnaps them, overpowers an American football player and takes them to Mongo to battle with the evil forces of Ming the merciless.

This film is an underrated gem because it genuinely is a case of a film that's so bad it's good. Every time I watch this film I spot something new and appalling about it. The script as you can tell from my initial synopsis above is abysmal with a variety of terrible lines that are quotable at any and every occasion "No not the Bore worms!" and "Gordon's alive!" being the most memorable but their are plenty of others. The acting is an unbelievable concoction of over the top performances by both Topol and Brian Blessed, to understated seriousness by the fantastic Tim Dalton and Max Von Sydow, to the truly bizarre by Ornella Muti and Sam J.Jones.

For anyone thinking of watching this please savour every delicious terrible moment as their is so much to see that's terrible and funny, but ultimately terribly funny.

and remember, when entering a structure that's shaped like a rocket that looks like a rocket, and is pointing at the stars like a rocket, always ask "Where's the telephone?" This movie is so bad it's really camp. Almost every role is played over the top by each actor. The actors range from the absurdly horrible (Timothy Dalton, Sam Jones & Melody Anderson) and the capable but hysterically overacting (Von Sydow and Topol).

The costumes are really over the top and garish. The music still holds up, basically due to its rise to iconic status. Some of the characters are so bad you hope Ming will get one of them. Frankly Max Von Sydow plays Ming so over the top that you find yourself hoping he'll prevail. I see the set decorators wisely steered away from using wallpaper. The stars overact so much it would all be burned off.

Having said all of this, I still love this movie. Its such enjoyable fun. I think mostly because Von Sydow and Peter Wyngarde are having such a good time -- its sad when Wyngarde's character dies. He's so tasty a character. Flash Gordon is played for laughs, and wisely so. It is no more sophisticated than the comic strip it's based on, and that takes the curse off of material that was old before it was born. Is all of this ridiculous? Of course. Is it fun? Yeah, sort of, it is. well Let's put it this way: you can walk, yet you still travel by car, don't you?

As much as I like the previous answer, there was a small blurb explaining the rocket cycles in a pre-production note. Something about using them as emergency transportation for injured hawk-people who couldn't fly.