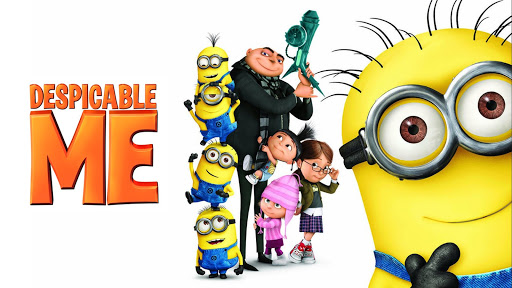 Fired from the Anti-Villain League, Gru travels to Freedonia to meet his long-lost twin brother for the first time. The siblings soon find themselves in an uneasy alliance to take down Balthazar Bratt, a former 1980/ child star who's out for revenge. Gru meets his long-lost charming, cheerful, and more successful twin brother Dru who wants to team up with him for one last criminal heist. The previous movies were so good that I thought this one could not possibly be as good. But I was wrong. The story is quite original and entertaining and there are a lot of implied positive life messages that by the end of the story you will feel your heart exploding with joy. The CGI is absolutely impeccable - as usual. If you are in the mood for a good story which will lighten up your day, watch it! Once again, Steve Carell proves he's better at doing CGI voice-overs than he is at live-action comedy.

The movie begins with a retrospective news story about Balthazar Bratt; an ex-child TV star gone bad (Holy Danny Partridge, Batman!). Followed by the super-villainous, middle-aged version going after the world's biggest diamond in the modern day. When Gru and Lucy fail to capture him, however, it turns out that this is the _third_ such disastrous confrontation.

Result; termination of employment with extreme (though non-lethal) prejudice.

The rest of the film is like a cross between Disney's THE INCREDIBLES and the Ah-nuld/Devito comedy TWINS. Carell does an admittedly good job making Drew appear to be a more naive/less competent version of Old Gru (the villainous one from the first film) simply by using a shriller voice combined with wavy-blond CGI hair! So, who better to help him overcome that handicap than his long-lost brother who once stole the Moon, itself?

Speaking of shrill voices; once again, the Minions are voiced--at higher RPM's--by French executive producer Pierre Coffin. Although, the sub-plot about their going to prison for loitering and trespassing wasn't as hilarious as it could have been, I still got a kick out of the French version of that old Gilbert and Sullivan classic, "The Modern Major General."

But, of course, what really stole the show (as in the first two films) was the lovability of Little Agnes. This time, on the hunt for a "really live unicorn."

Add all of the above--plus some STAR WARS and Marx Brothers references-- to a toe-tapping, finger-snapping, head-bobbing sound track from the Eighties (back when MTV actually lived up to the name "Music Television") and you've got another winner from Sony/Illumination. Thanks to the charming nature of the characters and their genuine good heartedness, Despicable Me 3 manages to be an entertaining enough film to feel like a decent continuation of the previous two chapters.

Submitted 14 hour(s) ago by ghdfhfghfghfghfgh