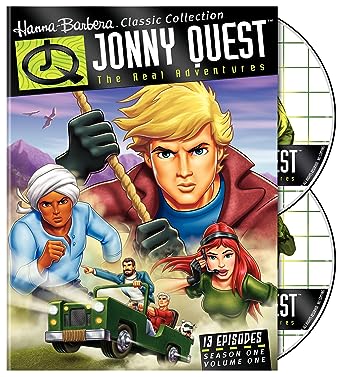 Dr. Benton Quest is a research scientist who is frequently called upon for missions that require his scientific and technical expertise. He is usually accompanied by his son Jonny, his tutor/bodyguard Race Bannon, their bulldog with the distinctive mask-like eye markings named Bandit, and Hadji, an Indian orphan who has special abilities of his own. Together, they investigate mysteries, perform rescues and battle nefarious villains around the world, most notably Dr. Zin. The Quest family and their bodyguard investigate strange phenomena and battle villains around the world. This was a hip, gutsy cartoon that didn't pull any punches. As a kid I remember thinking "Wow, these bad guys are really bad, and creepy too", but Jonny and the gang never lose their cool. I noticed how they would think their way through problems. They never picked a fight, but carried weapons just in case and they were not afraid to use them if need be. No touchy-feely crap here. Bust a head or bust a cap, whatever it takes to survive.

Jonny was the kid we wanted to be and Race Bannon was the guy we wanted to grow up to be. Dr. Quest was the archetypal workaholic dad, but still keeps Jonny close and loved him. Hadji was the friend we all need, smart, able, mysterious, good natured and most of all, loyal to a fault.

Despite the loss of his mom the four of them managed to form a working family unit despite Bannon's initial resistance to being a "baby sitter".

But most of all it was the gizmo's and adventures. Come on, hunting Pteradactyl's with a bazooka and .45 pistol from a jet pack. Running around in jets, boats, subs, snow cats, jeeps, mini bikes. Learning swimming, scuba, judo and karate from Race, science from Dr. Quest, mysterious stuff from Hadji. Oh, and don't get me started on Jade (Race Bannon's mysterious but loyal Amerasian girlfriend).

Dude, it just does not get any better than that. One of my friends popped several episodes of this on a disc for me. Man I didn't even know this existed till now! It rocks hard.

Jonny is a cool little dude with his Hindu friend and little dog. And I love the spy-like adventures they have (my favourite eps are the ones with the villain Dr. Zinn in em); and all the dated scientific gadgets his dad comes up with is awesome. It's also nice how the eps are so varied in both story and location. I gotta get some more of these eh.

My girlfriend has some old books called Rick Brent's Electronic Adventures (or something like that). I read one and it's like Jonny Quest (even has the Hindu buddy, a laserbeam to the moon, little dog, etc). Maybe that's where they got the JQ idea. Anyhow it's a really cool idea. Too bad they don't show these cartoons now. I like this type of stuff a lot more than what's played these days. If IMDb had a rating for this, I'd be laying out a 9 on this one.

Good stuff here. If you haven't seen Jonny Quest, you should do yourself a favour and have a go at it. It's safe for all ages BTW. Jonny's mom first appears in the comic-book story "Enter Race Bannon" in JONNY QUEST #2 (Comico, July 1986). The former Judith Waterston dies in Paris from an incurable disease when Jonny is still a young boy. Dr. Benton Quest is so devastated by her death that agent Roger "Race" Bannon is assigned to be Jonny's bodyguard.

The made-for-cable animated film Jonny's Golden Quest (1993) told a different story about Jonny's mother, as explained in the "Classic Jonny Quest FAQ": Now instead of an incurable disease, or even letting the matter simply remain a mystery, the death of Jonny's mother involved Dr. Zin. This revamping of the JQ world was not well received by many JQ fans. Also, her identity was changed from Judith Waterston to Rachel Wildey (the Wildey surname being used as a tribute to original series architect Doug Wildey). This has now become the official version of what happened and is reported as such in such reference material as the Jonny Quest Character Reference Guide, published by H-B in 1995. If ears serve, it was Jesse White (aka the Maytag repair man)

Submitted 7 hour(s) ago by ghdfhfghfghfghfgh