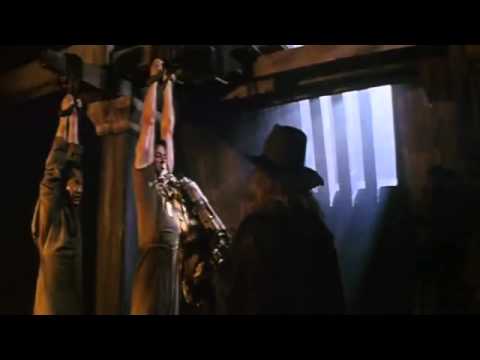 In the future, the Earth transforms into a desert wasteland called the Cursed Earth. Crowds of people now live within walled Mega-Cities where crime is out-of-control and elite police forces (The Judges. Judge, Jury and Executioners all in one) enforces law and justice in the Mega-Cities. Judge Joseph Dredd, the greatest Judge in Mega-City One is framed for the assassination of a journalist and his wife by renegade Judge Rico. Learning the truth about himself from Chief Justice Fargo, head of the council of Judges. Dredd with help from colleague and trusted friend Judge Hershey and cowardly computer hacker Fergie sets out to take on Rico, corrupt council member Judge Griffin, genetics scientist Ilsa Hayden and the super-strong ABC robot and put a stop to their evil plan involving genetic engineering (The key to the secrets of Dredd's past) and unleashing chaos and destruction in Mega-City One. In a dystopian future, Joseph Dredd, the most famous Judge (a police officer with instant field judiciary powers), is convicted for a crime he did not commit and must face his murderous counterpart. Let me start by admitting that this movie is extremely "cheesy": you have the obvious action hero (Stallone), the comic relief (Schneider), and the clever remark (Lane) in almost every scene; not only that, the script stresses each character's role to (what may be for some) the point of nausea.

Perhaps it is that cheesiness which so attracts me to this movie. There are no unexpected plot twists, simply a well mixed combination of decent storyline, semi-funny humor, and action sequences. The chemistry between Dredd (Stallone) and Fergie (Schneider) is surprisingly delightful as Fergie is so obviously misplaced in Dredd's world of "the Law".

Another unexpected, yet pleasant, surprise would be the performance by Armand Assante; his part as the antagonist plays perfectly alongside Stallone's powerful protagonist role, offering what would seem to be a well-balanced opposition instead of a measly opponent to be easily conquered.

I may have seen this movie a few hundred times since its release in 1995, and each time I see it, it's resonating effect is the same; it's a pleasant stroll down the 80's-90's action movie, easily grouped with others such as Predator, Demolition Man, The Fifth Element, etc... worthy of watching at least once, if not for the story, the humor, or the action then at least for the incredible cast. Before this movie even premiered, critics almost universally panned it. Because of this, many made fun of the film and few went to see it (I was among them). However, a few years later, I saw it on cable TV (on a day I was too lazy to change the channel) and was shocked that I didn't hate the movie. While a little dopey at times, the movie kept my attention and surely didn't deserve all the bad press. Another Stallone movie that falls in the same category was Demolition Man. A decent film--and this is shocking since I am a film snob.

FYI--do not think I am a crazed fan of Stallone or a family member. There are MANY movies he made that I hate--such as Lord of Flatbush, Rambo 2 (one of the DUMBEST movies ever made), or Rhinestone. He later elaborated: From what I recall, the whole project was troubled from the beginning. The philosophy of the film was not set in stone - by that I mean "Is this going to be a serious drama or with comic overtones" like other science fiction films that were successful? So a lotta pieces just didn't fit smoothly. It was sort of like a feathered fish. Some of the design work on it was fantastic and the sets were incredibly real, even standing two feet away, but there was just no communication. I knew we were in for a long shoot when, for no explainable reason Danny Cannon, who's rather diminutive, jumped down from his director's chair and yelled to everyone within earshot, "FEAR me! Everyone should FEAR me!" then jumped back up to his chair as if nothing happened. The British crew was taking bets on his life expectancy.